Mineo's vs. Aiello's: Which pizza is better? 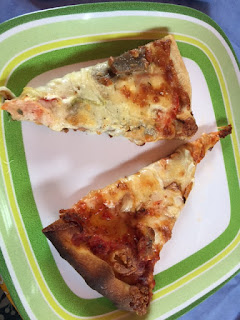 We recently spent the weekend vacationing in our hometown.  That seems a bit odd as we head into the city several weekends a month but we always have to turn around and drive back home.  So, when we had an event to attend that would take up most of a Saturday, we decided to take the opportunity to spend the entire weekend in the city.  We rented an apartment in Shadyside and decided that we would ease into the weekend.

I love pizza.  Chances are that if there is ever any leftover pizza in our house, I will have it for breakfast...still...to this day.  Pittsburgh has some great pizza places and I decided that our Friday evening dinner needed to be our own pizza contest.  Learning that there were two iconic joints in nearby Squirrel Hill, we decided to have a family pizza tasting between Mineo's and Aiello's.

Before we dove into our tasting test, I had to do a bit of research.  Mineo's has been around since 1958.  The reviews on TripAdvisor were very complimentary.  One guy wrote that he was a kid when it first opened and it was the very first place that he had ever had pizza.  He continues to go back to this day.  Now that was quite impressive.

Evidently, Mineo had an employee named Guiseppe Aiello.  Aiello left in 1978 to open his own pizza joint just a few doors down!  Now,that is competition.  Regardless to say, there would be a long term rivalry between the two of them.  Even followers began to take sides.  So what side would we take?

For Mineo's, we selected a large sausage and onion pizza with extra cheese.  For Aiello's, we went with one of their specialty pies, the Greek pizza (without the olives).  Aiello's was ready when we arrived but we had to wait several minutes for Mineo's.  Back in our apartment and with glasses of red wine, we sampled slices of Mineo's first.

Wow!  Perhaps I should not have asked for extra cheese.  This pizza was bathing in hot, gooey cheese.  The rest of the toppings were a bit lost in all of the cheese.  But, it was good.  The cheese had a tangy flavor and we all agreed that it wasn't just mozzarella.  What blew us away; however, was the crust.  I cannot begin to describe how good it was.

It was hard not to have a second slice of the Mineo's; however, we had to continue the test.  Aiello's Greek pizza had a good ratio of toppings to cheese.  Underneath the mozzarella was a layer of feta cheese which added a lot of depth.  The fresh tomatoes and gyro meat complimented the also  tangy cheese.  It was very, very good.

However, we all agreed that the Mineo's pizza was the better of the two.

However, that is not where our taste test ended.  With loads of leftovers, we tried the test again a few days later.  Leftover pizza is never as good as hot-out of the oven- pizza but which pizza would be better when reheated?

Reheated, we all thought the Aiello's slice was better than Mineo's.  Perhaps because the Mineo's pizza had so much cheese, it was harder to reheat.

Regardless of the outcome, we really enjoyed both pizzas. It's a shame that we do not live closer to both establishments.  I know that we would be having difficulty picking which place to go to!  I did, though, love my leftover pizza breakfasts for several days to follow!

Posted by Unknown at 7:31:00 PM
Email ThisBlogThis!Share to TwitterShare to FacebookShare to Pinterest
Labels: Reviews